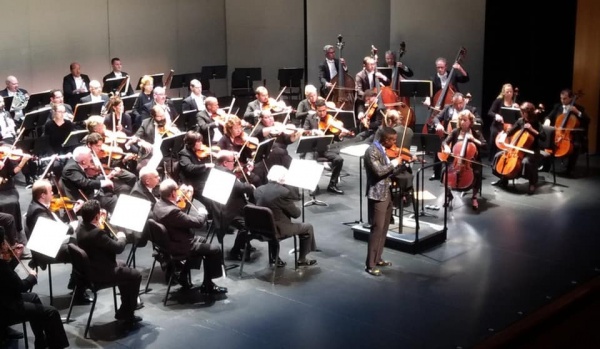 The Symphony of the Americas’  “Celebrate the Classics” program on Tuesday night at the Broward Center’s Amaturo Theater was replete with exciting music-making. Maestro James Brooks-Bruzzese celebrated this season as “The Year of the Maestro,”  opened the evening with a performance of Mozart’s Overture to The Abduction from the Seraglio marked by crisp articulation and strong detailing of the music’s Turkish influenced elements. The central, slower episode was given weight and grace, Marco Key-Navarrete’s oboe tones elegant in the important solo.

Gareth Johnson took the solo spotlight in Mendelssohn’s Violin Concerto in E minor. A winner of the Sphinx Competition and former artist in residence at Albany State University, Johnson now runs a strings studio in Lake Worth and is director of string programs in two Palm Beach County schools. He is also a composer and arranger and founder of The Parlor concert series in Lake Worth. Johnson is a dynamic player. From the first bars of the Mendelssohn concerto, his tone soared in finely calibrated, sonorous hues. Johnson phrased the score’s second theme with the aristocratic nobility of a bygone generation of violinists (i.e. Elman, Kreisler, Zimbalist). He tossed off the double stops of the cadenza with accuracy and élan. Brooks-Bruzzese offered a textbook example of perfect accompaniment, the well-coordinated ensemble dovetailing Johnson’s shaping of melodic lines adroitly.

Johnson captured the long-limbed lyricism of the Andante in rotund, elongated strokes His rubato was unabashedly wide and rich in the romantic tradition of violin performance. In the middle section, his playing of harmonics on multiple strings evoked ear-opening brilliance. Johnson sailed through the rapid hurdles of the final movement at top speed – Allegro molto vivace indeed.

Standing, cheering ovations and bravos brought Johnson back to the stage for a virtuosic encore – The Red Violin Caprice by John Corigliano. The depth of Johnson’s tone captured the music’s deeply romantic aura and he dashed through the rapid-fire coda with incisive bravura.

Guest conductor Pablo Mielgo took the podium on the concert’s second half to lead Tchaikovsky’s Symphony No. 5 in E minor. One of the finalists of the ensemble’s music director search, Mielgo is the conductor of the Orquestra Simfónica de les illeas Balears in Majorca and a well-traveled podium guest. He took the opening fate motif of Tchaikovsky’s symphony at a slow tempo but unleashed the orchestra’s firepower in the ensuing Allegro. Michael DeGregorio’s agile bassoon solo launched a brisk and bold romp across the tempest-tossed thematic strands of the balletic episodes. In the treacherously difficult horn solo of the second movement, Eric Kerley navigated the lyrical strokes with a full tonal compass and firm control. When the cellos and violas took up the principal theme, they sounded twice as large as their numbers. The sudden interruption of the fate motif in the brass came across with a blazing impact.

The waltz (third movement) was suavely shaped and the trio brought vigorous and transparent elucidation from winds and strings. With the fate theme now transformed into an anthem of triumph in a major key, the finale was taken at a sprightly clip. The martial splendor of the coda capped an invigorating reading of a symphonic classic. Throughout the performance, the musicians of the Symphony of the Americas were firing on all cylinders.

More in this category: « Visit the Debut of Artstroll at the Galleria At Fort Lauderdale on November 9 & 10 Young At Art Museum Offers Broward County School Teachers Free Admission »
Login to post comments
back to top