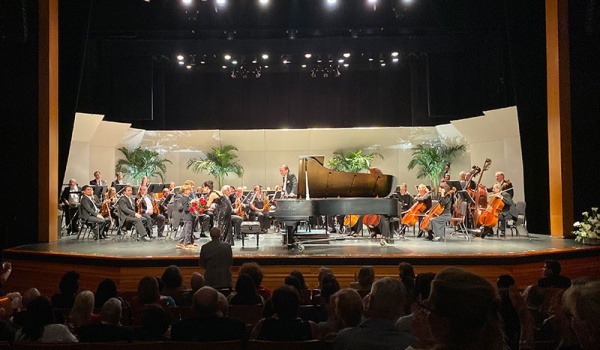 The Symphony of the Americas’ opening program of the season on Tuesday night at the Broward Center’s Amaturo Theater held some enticing surprises. A performance of a rarely heard work by Alberto Ginastera, the debut of a gifted locally based pianist and an impressive podium presentation by Venezuelan conductor Carlos Riazuelo contributed to an evening of strong music-making.

The ensemble’s entire 32nd anniversary season celebrates “The Year of the Maestro” in tribute to artistic director James Brooks-Bruzzese who retires at the end of the season after a fifty-year career on South Florida and international stages.

Ginastera was only 19 years old and still a composition student in 1935 when he wrote Concierto Argentino. While the composer is still clearly finding his individual creative voice in this score, it is fascinating to hear how many elements of Ginastera’s quintessential musical lineage are already  evident. The colorful and lustrous orchestration are clearly recognizable as Ginastera’s signature folk based idiom of his early works. Although written six years before his famous ballet score Estancia, two themes that the composer reworked for that opus are found in the concerto. The work veers between surging Latin tinged melodies and hard driving figurations that would not be out of place in a Bartok concerto. In the wild dance of the Pampas that forms the Allegro rustico finale, more than a suggestion of the popular Malambo (from Estancia) is heard. Perhaps the most appealing section is the second movement Allegetto poetico, featuring a languorous melody in the strings amid soft pianistic figures – a hybrid of Rachmaninoff with a Latin accent.

Ana Rodriguez, a faculty member at Miami Dade College North Campus and a pianist who has concertized throughout Europe and the Americas, was fully equal to the concerto’s formidable demands. She brought a plethora of pianistic firepower to the outer movements. In the first movement’s lengthy cadenza, her big boned octaves rattled the hall. At the movement’s exciting climax, the audience instantly broke into applause.  By contrast, the softness of her playing in the second movement exquisitely dovetailed the beautiful string lines, shaped eloquently by Brooks-Bruzzese. Rodriguez captured the relentless, thrusting strokes of the finale with precision and panache. Maestro Brooks-Bruzzese evoked multi- hued playing from the entire ensemble, the snappy percussion battery and lush strings taking special honors.

Rossini’s Overture to William Tell was even better. The warmth of tone and flowing Italianate phrasing of Iris van Eck’s solo cello preceded the musical thunder whipped up by Brooks-Bruzzese in the storm section.  Marco Key-Navarrete’s oboe solo and Griffiths’ flute heralded the calm after the deluge with tonal richness and fluid pulse. The trumpet calls heralding the final cavalry charge (still remembered by many as the Lone Ranger theme) were taken at a crisp clip, Brooks-Bruzzese keeping the rhythmic energy intact to the last bars.

At the very beginning of Rossini’s Overture to La Gazza Ladra, Riazuelo and the orchestra were not quite in sync but that quickly was rectified. His beat is clear and his gestures purposeful. Riazuelo is clearly a conductor who knows what he wants a score to sound like and has the technique to create that aural musical stream. He captured Rossini’s witty accents and played up the typical Rossinian crescendo with vigor.

Riazuelo fully encapsulated the orchestral magic of Ravel’s Ma Mere L’Oye. Unique among Ravel’s orchestral output, the suite captures the magic of fairy tales in delicate tints rather than the lavish orchestral panoply of Bolero or La Valse. Elegant wind lines came through with fine transparency in the opening Pavane. Riazuelo evoked the glints of Oriental color, so beloved by many French composers, in the Empress of the Pagodas movement.. Over the full instrumental compliment, the crucial harp part was strongly present and audible.  Precision and disciplined ensemble playing alighted the contrasts of the Waltz of Beauty and the Beast, taken at a natural, organic tempo. The soft pastel sounds of concertmaster Bogdan Chruszcz’s solo violin and van Eck’s stylish cello complimented the deep growl of Michael DiGregorio’s bassoon (as the beast). The noble melodic lines of the Fairy Garden were spaciously conveyed. This was idiomatic Ravel distinguished by clarity of individual instrumental lines and textures.

The Suite No. 2 from Manuel de Falla’s ballet score The Three-Cornered Hat brought the evening to a rousing conclusion. Riazuelo’s brisk tempo strongly pointed the seguidilla rhythms of the Neighbors’ Dance while perfectly capturing the music’s Andalusian aura. There were strong accents in the flamenco infused Miller’s Dance with Riazuelo drawing a full range of dynamics from full-throttle fortissimo to the quietest sounds. He speeded up at the conclusion, delivering a thrilling climax. The joyous finale was drawn with an edge of the seat intensity. Riazuelo drew outstanding playing from all sections of the orchestra.

James Brooks-Bruzzese conducts the Symphony of the Americas in Cirque Holidays at 7:45 p.m. December 3 and 2 p.m. December 8 at the Amaturo Theater, Broward Center in Fort Lauderdale.  954-335-7002  www.sota.org

More in this category: « Steve Hackett: Genesis Revisited Comes To Parker Playhouse Visit the Debut of Artstroll at the Galleria At Fort Lauderdale on November 9 & 10 »
Login to post comments
back to top