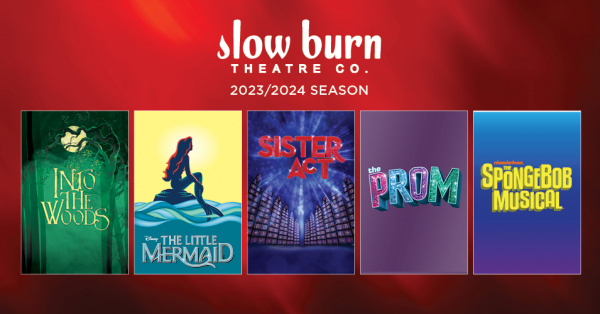 FORT LAUDERDALE – Filled with epic fairytales that will take audiences into the woods and under the sea and poignant stories of faith, love and acceptance, Slow Burn Theatre Company announces its 2023/2024 season of five Broadway musicals in the Amaturo Theater at the Broward Center for the Performing Arts. The five musicals are Into the Woods, Disney’s The Little Mermaid, Sister Act, The Prom and Spongebob The Musical.

“From the kindness we learn as children from cartoon and fairy tale characters to the often difficult choices we make as adults that allow us to become accepted as who we are, our upcoming season celebrates friendship and the universal emotions and dreams that unite us,” said Slow Burn Theatre Artistic Director Patrick Fitzwater.

Slow Burn Theatre will once again offer an open captioned performance of each production in which a text display located to the side of the stage scrolls words in synchronization with the performance.

The season begins with Into the Woods from Saturday, October 14 through Sunday, October 29 with an open-captioned performance on Sunday, October 22 at 2 p.m. The original 1988 Broadway blockbuster brought home Tony Awards® for Stephen Sondheim for his score and James Lapine for his book, only to be followed by a 2002 run that took home the award for “Best Revival of a Musical” and a current Broadway production. Cinderella, Rapunzel, Little Red Ridding Hood, the Baker and his wife and Jack and the beanstalk are caught up in an epic fairytale about wishes, family and the choices we make. This modern classic weaves together a fantastical fairytale of mystery and enchantment with a euphoric score creating a sophisticated musical twist on beloved childhood fables. This production is presented through special arrangements with Music Theatre International. Into the Woods was originally directed on Broadway by James Lapine with orchestrations by Jonathan Tunick.

Based on one of Hans Christian Andersen's most beloved stories and the classic animated film, Disney’s The Little Mermaid delivers a theatrical holiday treat from Saturday, December 16 through Sunday, December 31 with an open captioned performance Sunday, December 24 at 2 p.m. This splashy musical extravaganza put the “sea” in the holiday season with a love story for the ages. When Ariel, King Triton's youngest daughter, wishes to pursue the human Prince Eric in the world above, she bargains with the evil sea witch, Ursula, to trade her tail for legs, but the bargain is not what it seems. With music by eight-time Academy Award® winner, Alan Menken, lyrics by Howard Ashman and Glenn Slater, and a compelling book by Doug Wright, the musical features irresistible songs including "Under the Sea," "Kiss the Girl" and "Part of Your World." This production is presented through special arrangements with Music Theatre International.

Brace yourself Sister for a divine feel-good musical comedy smash hit musical which is joyous and uplifting in equal measures as the Slow Burn Theatre season continues with Sister Act from Saturday, February 3 through Sunday, February 18 including an open captioned performance on Sunday, February 11at 2 p.m. Based on the hit 1992 film and featuring original music by Tony- and eight-time Oscar® winner, Alan Menken (Newsies, Beauty and the Beast, Little Shop of Horrors), this heavenly hit is filled with the sounds of Motown, soul and disco, and was nominated for five Tony Awards, including Best Musical. When disco diva, Deloris Van Cartier, witnesses a murder, she is put in protective custody in the one place the cops are sure she won't be a found: a convent! Sister Act has lyrics by Glenn Slater, book by Cheri Steinkellner and Bill Steinkellner and additional book material by Douglas Carter Beane. Based on the Touchstone Pictures Motion Picture, Sister Act, written by Joseph Howard, this production is presented through special arrangement with Music Theatre International.

The Prom, the musical about which Variety raved, “It’s so full of happiness that you think your heart is about to burst,” is presented from Saturday, March 23 through Sunday, April 7 with an open captioned performance on Sunday, March 31 at 2 p.m. Winner of The Drama Desk Award for Best New Musical, The Prom follows four eccentric Broadway stars who are on a mission to transform lives when they discover the plight of a student who just wants to bring her girlfriend to prom and soon her entire town has a date with destiny. Expertly capturing all the humor and heart of a classic musical comedy with a message that resonates with audiences now more than ever, The Prom features a book by Tony Award winner Bob Martin (The Drowsy Chaperone) and Tony Award nominee Chad Beguelin (Aladdin), music by Tony Award nominee Matthew Sklar (Elf) and lyrics by Tony Award nominee Chad Beguelin. This production is presented through special arrangement with Theatrical Rights Worldwide.

A legendary roster of Grammy® Award winners including Sara Bareillas, Cyndi Lauper and John Legend help bring one of the world’s most beloved characters to the stage as the 2023/2024 Slow Burn Theatre Season culminates with the bold, original musical Spongebob The Musical Saturday, June 8 through Sunday, June 23 with an open captioned performance on Sunday, June 16 at 2 p.m. Adapted from the iconic Nickelodeon series, SpongeBob, Patrick, Sandy, Squidward and all of Bikini Bottom face total annihilation — until a most unexpected hero rises to take center stage and the power of optimism saves the world. Based on the series by Stephen Hillenburg with musical production conceived by Tina Landau, the musical has a book by Kyle Jarrow and original songs by Yolanda Adams, Steven Tyler and Joe Perry of Aerosmith, Sara Bareilles, Jonathan Coulton, Alex Ebert of Edward Sharpe & the Magnetic Zeros, The Flaming Lips, Lady A, Cyndi Lauper, John Legend, Panic! At the Disco, Plain White T’s, They Might Be Giants and T.I. The score also features songs by David Bowie, Tom Kenny and Andy Paley. Additional lyrics are by Jonathan Coulton with additional music by Tom Kitt. Nickelodeon, SpongeBob SquarePants, and all related titles, logos and characters are trademarks of Viacom International Inc. This show is presented in arrangement with Concord Theatricals.

Season subscriptions start at $216 and reflect a 20% discount compared to single ticket prices. Ticketmaster is the only official ticketing service of the Broward Center and Parker Playhouse. Buy tickets online at BrowardCenter.org, or Ticketmaster.com; by phone at 954.462.0222 or in person at the Broward Center’s AutoNation Box Office.

More in this category: « The Broward Center for the Performing Arts Hosts Free Open House for Winter/Spring Classes The Best of Broadway with Shelly Berg Trio »
Login to post comments
back to top