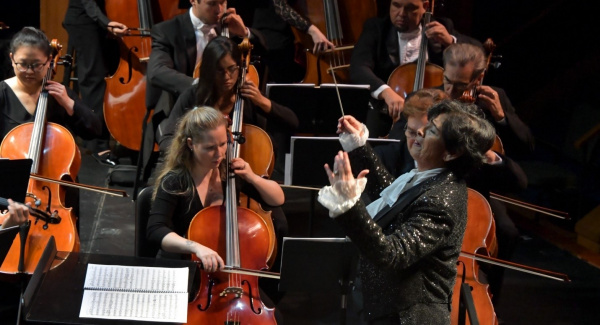 FORT LAUDERDALE, Fla. – South Florida Symphony Orchestra (SFSO), led by Sebrina María Alfonso, will present Mozart’s Concerto for Two Pianos in E-flat Major, K. 365, featuring Catherine Lan and Tao Lin of Duo Beaux Arts, Mendelssohn’s Symphony No. 3 in A minor, Opus 56, “Scotch” and Rossini’s The Italian Girl in Algiers Overture as part of its Masterworks IV series. The concerts will commence on March 23, at 7:30 p.m., at The Parker in Fort Lauderdale, on March 24, at 7:30 p.m. at Temple Israel of Greater Miami and on March 26, at 7:30 p.m., at the Tennessee Williams Theatre at The College of The Florida Keys.

The program begins with the sparkling overture to Rossini’s comic opera The Italian Girl in Algiers, which is said to be among the most memorable in all of Rossini’s work. It is known for its distinct opening of slow, quiet woodwinds in imitation of pizzicato strings, leading to a sudden loud burst of sound from the full ensemble.

The concert continues with Mozart’s Concerto for Two Pianos in E-flat Major, K. 365, featuring the dynamic Catherine Lan and Tao Lin -- husband and wife – of Duo Beaux Arts. The pair will join SFSO on the mainstage for the first time, performing one of the limited number of Mozart works for two or more solo instruments with orchestra. They were regular performers during SFSO’s virtual Intermission Music Series, presented for free during Covid shutdown. Lan also performs as a member of the South Florida Symphony Orchestra, most recently during its Handel’s Messiah concerts. Formed in 2008, Duo Beaux Arts is critically acclaimed for its adrenalized performances across Europe and the United States.  The pair has been featured on Fox 4’s “Morning Blend TV,” Maine Public and in Venice magazine, Asian-Trend magazine, World Journal New York, and Gulfshore Life magazine. Season highlights include recitals at Swan City Piano Festival and the prestigious Cosmos Club in Washington D.C., as well as concert tours in Hungary and Canada.

“Catherine Lan and Tao Lin join the Symphony performing Mozart’s Double Piano Concerto. This work is a premiere for South Florida Symphony; the beauty of Catherine and Tao’s artistry will take this concerto to a new level,” said Maestra Alfonso.

The program concludes with Mendelssohn’s Symphony No. 3 in A minor, Opus 56. Some of Mendelssohn’s most brilliant musical inspirations came from his travels. While on holiday in Scotland, he was particularly moved by the picturesque, evocative ruins of Holyrood Chapel in Edinburgh, the inspiration for his Third Symphony — also known as the “Scottish” or “Scotch” Symphony.

South Florida Symphony Orchestra, recently named Broward Center for the Performing Arts’ first Partner in the Arts for its affiliated $30 million renovated venue, The Parker, launched its 2021-22 season in spectacular style on November 17. The season runs through April 28, 2022.

Tickets for Masterworks IV: Mozart, Mendelssohn & Rossini start at $15 for the March 23 concert at The Parker (707 NE 8th St, Fort Lauderdale). Tickets start at $25 for the Tennessee Williams Theatre at The College of The Florida Keys (5901 College Road, Key West) and general admission tickets for Temple Israel of Greater Miami (137 NE 19th Street) are $36. Tickets for all three venues are on sale, now at southfloridasymphony.org/masterworksiv.  Additional health and safety concert attendance protocols can be found on the site. Student tickets and group rates are also available by calling (954) 522-8445 or emailing This email address is being protected from spambots. You need JavaScript enabled to view it.

More in this category: « Applications For Scholarships Are Now Open For Upcoming Classes At The Broward Center For The Performing Arts Rhythm By The River Festival Celebrates Black Voices »
Login to post comments
back to top