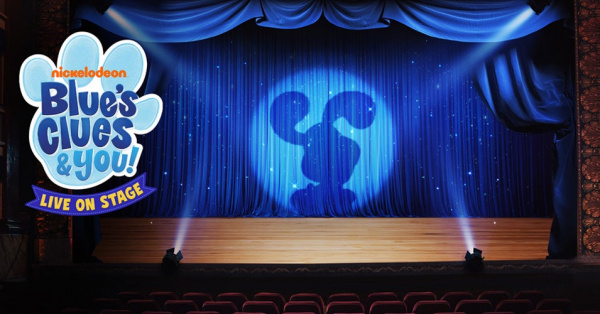 FORT LAUDERDALE – The Broward Center for the Performing Arts scares up unforgettable excitement this October with the ill-fated wives of Henry the VIII, an alien plant with a taste for blood, Halloweentown's pumpkin king and an All Abilities Class Halloween Dance Party along with nights of heart-pounding rock and roll, laugh-out-loud comedy and family-friendly theater.

Kids and families will fall in love with theater at Blue's Clues & You! on Saturday, October 1 at 2 p.m. in the Au-Rene Theater. In this epic adventure, Josh is conjuring up a magical theater show with the audience’s help. With Broadway-style song and dance, Josh and Blue skidoo to amazing places including making a music video with Rainbow Puppy and floating in outer space. Young audiences will discover the joy of singing, dancing, and creativity the Blue's Clues way – with hugs, laughter, smarts and their help. This event is presented as part of The Islands of The Bahamas Imagination Series. Tickets are $24.50-$59.50 with $10 lap tickets for children 12 months of age and younger. A Blues Clues & You Photo Experience is available for $50 to take a photo with the characters on stage after the show.

The Broadway blockbuster SIX comes to the Au-Rene Theater on Tuesday, October 11- Sunday, October 23. Divorced, beheaded, died, divorced, beheaded, survived. From Tudor queens to pop princesses, the Six wives of Henry VIII take the mic to remix 500 years of historical heartbreak into an exuberant celebration of 21st century girl power! Written by Toby Marlow & Lucy Moss, this new original musical is the global sensation that everyone is losing their head over. The New York Times says SIX “Totally Rules!” (Critic's Pick) and the Washington Post hails SIX as “Exactly the kind of energizing, inspirational illumination this town aches for! The Broadway season got supercharged!” The Bank of America Broadway in Fort Lauderdale 2022/2023 season is made possible with the generous support of title sponsor Bank of America and presenting sponsor Nicklaus Children’s Hospital. Bank of America Broadway in Fort Lauderdale is presented by Florida Theatrical Association in partnership with Broadway Across America and Broward Center for the Performing Arts. Performance times are Tuesday-Friday at 8 p.m., Saturday at 2 and 8 p.m. and Sunday at 1 and 6:30 pm. Tickets begin at $35.

The Slow Burn Theatre 2022/2023 season presented by American National Bank begins with Little Shop of Horrors Saturday, October 15- Sunday, October 30 in the Amaturo Theater. Audiences will feed the need for musical hilarity with this delicious sci-fi smash about a man-eating plant. A deviously delicious Broadway and Hollywood sci-fi smash musical, Little Shop of Horrors has devoured the hearts of theater goers for more than 30 years. Howard Ashman and Alan Menken (Disney's The Little Mermaid, Beauty and the Beast and Aladdin) are the creative geniuses behind what has become one of the most popular shows in the world. The meek floral assistant Seymour Krelborn stumbles across a new breed of plant he names "Audrey II" - after his coworker crush. This foul-mouthed, R&B-singing carnivore promises unending fame and fortune to the down and out Krelborn as long as he keeps feeding it, BLOOD. Over time, though, Seymour discovers Audrey II's out of this world origins and intent on global domination! Performance times vary. Tickets are $49-$65.

Prepare for a night of savage self-deprecation and soul-searching as the Broward Center and AEG Presents brings Daniel Howell “We’re All Doomed! Tour” to the Au-Rene Theater on Thursday, October 27 at 8 p.m. With sarcasm, satire and a desire to skewer everything that's wrong with society, Howell is determined to find some hope for humanity or at least laugh like it's the end of the world (because it probably is). Tickets are $29.50-$59.50 with $124.50 Spirit Club Level seats and VIP packages offering various exclusives for $125-$185.

Disney in Concert Tim Burton’s Nightmare Before Christmas will screen the haunting holiday classic with Danny Elfman’s score performed live by the South Florida Symphony Orchestra in the Au-Rene Theater on Friday, October 28 at 8 p.m. From the mind of Tim Burton comes the story of Jack Skellington, Halloweentown's pumpkin king, who plots to bring Christmas under his control by kidnapping Santa Claus and taking over the role after he accidentally stumbles on Christmastown. But Jack soon discovers even the best-laid plans of mice and skeleton men can go seriously awry. The Broward Center in partnership with South Florida Symphony Orchestra presents this event as part of the 2022/2023 Broward Center Dance and Classical Series. This presentation is licensed by Disney Concerts©. All rights reserved. Tickets are $45-$75 with $160 Spirit Club Level tickets and $85 VIP tickets offering premium seating.

A group of powerhouse bands hit the stage together for one night only as Hoobastank and Lit are joined by Alien Ant Farm and Kristopher Roe in the Au-Rene Theater on Saturday, October 29 at 7 p.m. Best known for their crossover hit “The Reason,” American post-grunge rock band Hoobastank has a catalog of chart-topping hits including “Crawling In The Dark,” and “Out Of Control.” Lit helped define an entire generation of SoCal power punk with hard-charging hits like “My Own Worst Enemy,” “Miserable," "Zip-Lock," "Lipstick & Bruises" and the RIAA Certified Platinum “A Place in the Sun.” Special guest Alien Ant Farm hit number one on modern rock charts with "Smooth Criminal," a funky metal mix of Michael Jackson's original song, and additional hits include “Bug Bites” and “These Days.” Founding member, songwriter and lead vocalist Kristopher Roe of The Ataris (“Boys of Summer") opens a full night of honest rock and roll. Tickets are $45-$100 with $120 Spirit Club Level seats and VIP packages priced at $145 and $235 offering various exclusives.

Emmy-nominated television personality, New York Times best-selling author, podcaster, and hairstylist to the stars Jonathan Van Ness brings his “Imaginary Living Room Olympian” tour to the Au-Rene Theater on Sunday, October 30 at 7 p.m. He recently completed his first worldwide comedy tour “Jonathan Van Ness: Road to Beijing,” which included a sold-out show at Radio City Music Hall, as well as stops in London, Ireland, Australia and New Zealand. Van Ness stars on Netflix’s Emmy Award-winning reboot series Queer Eye, where he shines as the hair guru and self-care advocate. He also starred on the Emmy-nominated web series Gay of Thrones, a witty social commentary series recapping HBO’s Game of Thrones which garnered Emmy nominations in three consecutive years for “Outstanding Short Form Variety Series.” Getting Curious with Jonathan Van Ness was named one of the Top Podcasts of 2018 by Time Magazine, won the iHeart Radio Award for Best LGBTQ Podcast, and was a 2020 People’s Choice Award nominee for Best Pop Podcast. Tickets are $45-$150 with $130 Spirit Club Level tickets and $285 VIP tickets that offer a meet and greet with the artist.

The All Abilities Class Halloween Dance Party on October 30 at 11 a.m. in the JM Family Studio Theater features an interactive and engaging arts experience for children and adults on the autism spectrum as well as individuals with other developmental disabilities. Teaching artist TJ Tekurio will guide participants through dance routines and poses before ending the 45-minute class with a dance party and refreshments. No experience is needed to enjoy the fun at this gleefully ghoulish gathering and guests are invited to bring their Halloween costumes. All Abilities classes are made possible through the generous support of the Taft Foundation. Special thanks to UM-NSU CARD for their in-kind support. Tickets are $10.

The Broward Center 2022/2023 season is supported by the Broward Performing Arts Foundation. AutoNation, Greater Fort Lauderdale Convention & Visitors Bureau, Spirit and Sylvester Comprehensive Cancer Center are proud sponsors of the Broward Center. Programs are also sponsored in part by the State of Florida, Department of State, Division of Arts and Culture, the Florida Council on Arts and Culture, and the National Endowment of the Arts.

More in this category: « The Parker Offers Musical Thrills And Supernatural Chills This October ArtServe Salutes Hispanic Heritage Month With “Narratives” Exhibit Thirty-One Hispanic and Latin Artists From 12 Nations to Participate »
Login to post comments
back to top