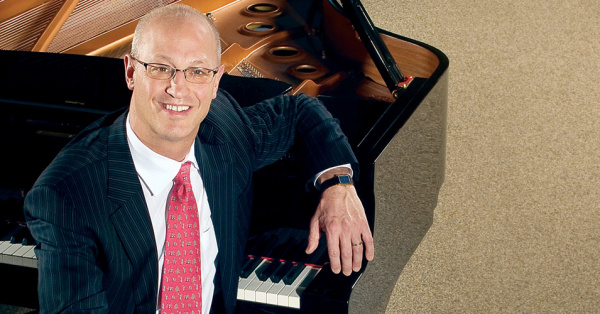 This quintessential artist who considered himself a musician from the age of four began music academia at age six in a gifted children’s program at the Cleveland Institute of Music. He went on to study with Maxine Priest, Lucien Lemieux, and Albert Hirsh, Rudolph Serkin and Abbey Simon, who many consider to be the greatest music teachers of all time!

Throughout his forty-year career as a Dean, father and professor, Berg has prioritized his composing and playing music, with his family and work life, while promoting his performance career as well. He says modestly that the phone has been ringing all that time and he is humbly grateful.

A magnificent man who is “immensely proud of [his] recent recording, ‘Gershwin Reimagined: An American in London’ (Decca Gold), recorded in London under the baton of José Serebrier with the sublime Royal Philharmonic Orchestra. As a jazz and classical pianist, he says, “I have always felt a deep affinity for Gershwin’s music.” In January he will grace the stage at Broward County, FL’s Amaturo Theater with some renditions of music near and dear to his heart.

With sidemen, Dafnis Prieto, drums and Carlo De Rosa on bass, the trio offers a gentle and easy entry into some classics that feel familiar and remind us of home. Cuban-born Prieto is a GRAMMY-winning musician for his big band album, Back to the Sunset, which DownBeat called "one of the best recordings of the year. As a US Jazz Ambassador in 1999 Carlo de Rosa traveled to South Africa, Mauritius, Madagascar, Kenya, Tanzania, and Zimbabwe. Other performances abroad have led him to countries as varied as France, Germany, Spain, Portugal, Estonia, Russia, Switzerland, Italy, Austria, Holland, Belgium, Czech Republic, Argentina, Chile, Romania, Slovenia, Denmark, England, Scotland and Ireland.

Single tickets for each concert in the Gold Coast Jazz Society 30th anniversary 2021 -2022 Concert Season are $65 plus applicable fees and can be purchased online at www.browardcenter.org or through Ticketmaster at 954.462.0222.

It’s Still time to Get a Jazz Trio Subscription (3 concerts of your choice) for $150 per person.  Gold Coast Jazz Society members are offered a discounted rate on full subscriptions or jazz trio subscriptions. For subscription information and to become a member, go to www.goldcoastjazz.org