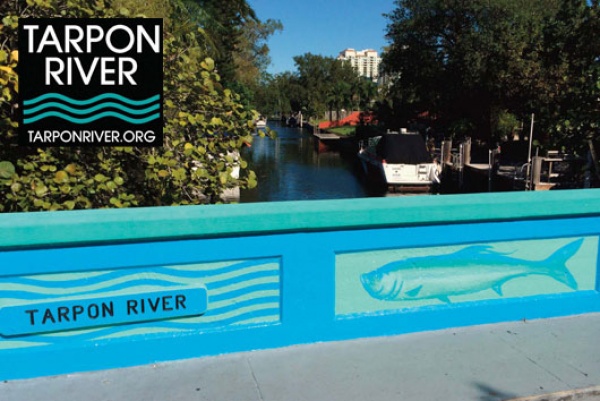 Lying just south and west of downtown Fort Lauderdale, Tarpon River is one of the oldest neighborhoods in the City. It’s bounded by the New River, South Andrews Avenue and Davie Boulevard. The neighborhood also contains its namesake river, the Tarpon River, a naturally flowing river (often mistaken for a canal) that meanders through the Tarpon River, Downtown and Rio Vista neighborhoods.

For those of us who live here, we consider it a hidden gem. How lucky can you be to live so close to everything, yet be able to sit on your porch or in your backyard and enjoy the gentle southeast breezes and hear the rattle of palm fronds? Tarpon River is city living at its best.

Several of the homes within its boundaries are noted in an architectural and historical survey of Fort Lauderdale that was reported to the city in 1987. In addition, it has many homes built more recently including single family as well as duplex construction. Noteworthy condominium projects include the beautifully situated island community of
River Reach and the Esplanade Condominium with its iconic octagonal shape gracing a bend on the New River across from the Broward Center for the Performing Arts.

Despite our historic past, there is nothing old-fashioned about the Tarpon River neighborhood. Residents here can enjoy all of the same great amenities that everyone else in Fort Lauderdale enjoys, including the ability to participate in every concert, art festival, boat parade, food festival and charity walk. And the best part is we get to go to it on foot, by bike, by paddle board, or by boat! Imagine living in a neighborhood where you can either walk to the Sunday Jazz Brunch on Riverwalk or, if the breeze is right, you can hear it all from your own backyard or balcony!

Of course, being close to downtown has its trade-offs such as the occasional siren screech down Fourth Avenue and railroad horns. And, yes, some of our streets can be “cut-throughs” for folks on their way to their workplace downtown. But over the last three decades, an active and long-standing civic association, the Tarpon River Civic Association, has worked with city and county officials to mitigate traffic issues with side street closures, speed bumps, and other traffic calming options. And fortunately, some of Tarpon River’s residents have included past mayors, city commissioners, sheriffs, and dedibycated volunteer board members and city activists who are committed to maintaining the neighborhood’s quaint, scenic feel.

And we love our neighborhood parks! When you live in a city, any city, green space is a premium. Of course, we are proud that we get to enjoy the partially completed south side of Riverwalk that runs along in front of the Esplanade condominium as well as the newer Lewis Landing Park and several greenways that present to either the New or Tarpon River. But we also have walking access to the Hardy Park urban playgrounds on South Andrews Avenue. Recently improved with new shade structures, a pavilion and long-awaited public restrooms, all can enjoy a lovely view of the downtown skyscrapers and be reminded of a park in Boston, Chicago or Atlanta. Hardy Park blends the tranquility of our live oaks and youthful vibrancy of families enjoying picnics and playgrounds.
And, of course, the hustle of an inviting city is just within reach.

When you live in a city neighborhood, the heartbeat is the people who live there. The Tarpon River neighborhood has long time residents and many new arrivals. We all choose to live here. Some of us have tried the Westons and the Parklands. Some of us come from Miami and other ports of call. Why? Because in Tarpon River you are looking for something more.

Maybe it is the small town friendliness and the neighborly helping hand from time to time…or the energy that only growing and prosperous city like Fort Lauderdale can provide. We want to see water. We want to see iconic structures both historic and new. We want to see boats of all kinds plying the rivers. We want to see trees and lots of them. We want to see kids on bikes and new moms with strollers. We want to hear the sounds that make us a neighborhood and be a caring community within the heart of it all. We want, as the City Vision proclaims, to be a vital part of a city that you never want to leave.

View the embedded image gallery online at:
https://www.cityviewfortlauderdale.com/neighborhoods/neighborhood-living-near-the-heart-of-it-all-tarpon-river.html#sigProId0842b53a69
More in this category: Colee Hammock: Serenity and history, in the city »
Login to post comments
back to top