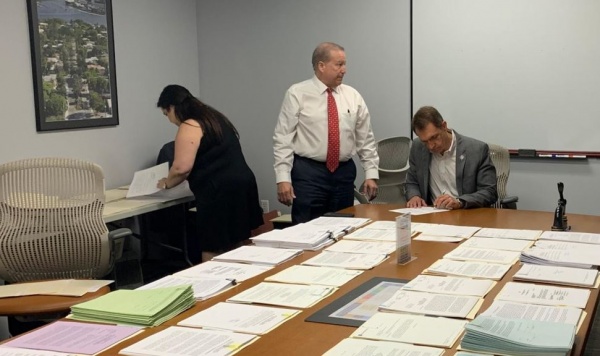 Through the parks bond, nearly every park in our City will see upgrades and enhancements. Funds will also be available for signature projects in each Commission District including constructing Tunnel Top Park in District 4 atop the northern portion of the Kinney Tunnel above Federal Highway; transforming the former Lockhart Stadium site and surrounding property into a vibrant, active community destination in District 1; adding a water playground, tennis courts, sand volleyball courts, and a parking garage to Holiday Park in District 2; and building a new community center and other enhancements at Joseph C. Carter Park in District 3.

The City is moving forward with hiring architects to begin the replacement of the current police headquarters that was built in the 1950s. The new facility will provide workspace and state-of-the-art technology to a department with over 500 sworn officers and over 700 sworn and non-sworn personnel. The station will be energy and operationally efficient, featuring hurricane-resistant materials and building techniques to better serve the public safety needs of our City. It will include training rooms, public meeting areas, and community space where residents and officers can work together on crime prevention and safety initiatives.

Simultaneously, plans are in place to invest $200 million for stormwater system improvements which will include new pump stations, exfiltration trenches, catch basins, stormwater pipes, permeable pavement, swales, and force mains in seven key areas of the City. In addition, the work will include repairing and rehabilitating 22 miles of stormwater pipes, installing another 129 tidal control valves, and building seven new pump stations. The initiative will begin with $70 million in stormwater improvements and upgrades in the River Oaks and Edgewood neighborhoods, followed by improvements in five other priority areas vulnerable to flooding.

Guided by the City Commission, last month, Fort Lauderdale received high marks for its budgetary performance and healthy growth from both major Wall Street credit rating agencies. Standard & Poor’s boosted the City’s rating from AA+ to AAA.  Moody’s upgraded its outlook on general obligation bonds from stable to positive. This recognition was in response to the City’s detailed plans to address its aging infrastructure while avoiding impacts to the utility reserves and indicates strong confidence in the City’s financial management. Fort Lauderdale’s strong bond ratings will save residents and businesses millions of dollars in interest costs and strengthen its long-term financial stability.

More in this category: « Guy Harvey Ocean Foundation Awards $40,000 in Scholarships to Eight Florida Students City of Fort Lauderdale Update on Coronavirus »
Login to post comments
back to top