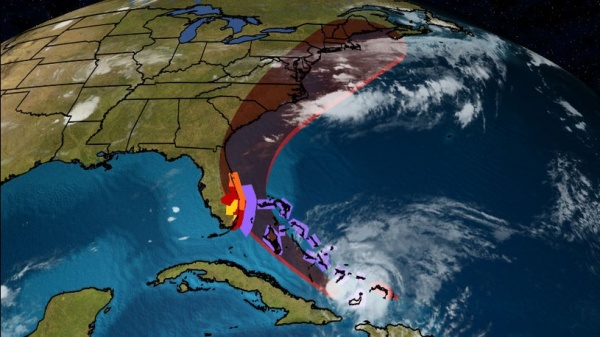 According to the latest update from the National Weather Service (NWS), on the current forecast track, the center of Hurricane Isaias will move over northern Andros Island during the next few hours and move near or over Grand Bahama Island in the Northwestern Bahamas later today. The storm is expected to move near the east coast of Florida tonight through Sunday.

The NWS expects weather conditions to continue to deteriorate today with sustained tropical storm force winds arriving later this afternoon and continuing through Saturday night and into Sunday. Isaias is expected to bring heavy rain ranging from 2 to 4 inches across Broward County which could result in urban and street flooding, especially in low-lying and flood prone areas. A storm surge of two feet or less in Broward County could produce possible flooding in coastal areas and other areas vulnerable to surge. Swells are expected to spread along the east coast of Florida today causing dangerous surf and rip current conditions.

Neighbors are reminded to finish their storm preparations immediately as the arrival of increasingly stronger winds will make outdoor preparations dangerous. Please make sure all loose items are stored or secured including outdoor furniture; plants; trash, yard waste, and recycling carts and bins; tree trimmings and branches. As high winds and heavy rainfall arrives, residents and visitors should remain indoors until the storm passes.

Please continue to monitor the storm closely. For the latest updates on Hurricane Isaias, visit the National Hurricane Center website at www.nhc.noaa.gov.

More in this category: « City Reduces Boundaries of Precautionary Waterway Advisory in Las Olas Isles Area
Login to post comments
back to top