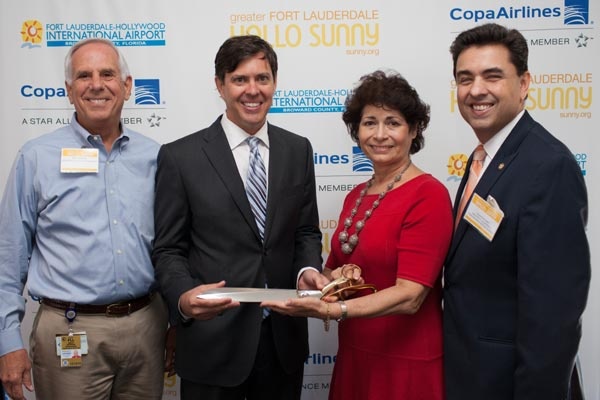 A member of Star Alliance global airline network, Copa Airlines will begin nonstop service four times a week between Fort Lauderdale and Panama on July 11, 2014, as part of plans for rapid network expansion this year.

The flight is expected to have an annual economic impact on the area's tourism industry of approximately $12.12 million, as well as increase business opportunities with Latin America.

"Copa's new Fort Lauderdale flight will do more than just connect the region to Panama; it opens new doors to Latin America for business and tourism growth in both directions," said Copa's Mohan. "From our Hub of the Americas in Panama, passengers will be able to make convenient connections to and from more than 55 destinations throughout Latin America."

As a leading Latin American airline, Copa Airlines has been working closely with Broward County tourism and airport authorities to promote the upcoming flight, which will provide easy access for passengers from Latin America to the area's beaches, spa resorts, arts and entertainment districts, dining, nightlife and shopping experiences.

"We are delighted Copa Airlines has chosen Greater Fort Lauderdale to provide service through their gateway in Panama to Central and South America and are committed to supporting the airline's continued growth and expansion plans," said Kent G. George, Director of Aviation, Broward County Aviation Department.

Passengers from Greater Fort Lauderdale will have a convenient travel option for conducting business in Panama or visiting Panama's many cultural, eco-travel and tourist attractions, as well as greater access to destinations throughout Central and South America. In particular, the new Copa flight will provide increased connectivity to seven cities in Brazil, including Sao Paulo and Rio de Janeiro; nine cities in Colombia, including Bogota, Medellin, Cali, and Bucaramanga; Guatemala City and San Jose, Costa Rica in Central America; and Lima, Peru; in addition to other major cities in Latin America.

The airline will operate a Boeing 737-700 Next Generation with 12 business class seats and 112 economy seats on the flights. Copa flight 265 will depart Copa's Hub of the Americas at Tocumen International Airport in Panama on Mondays, Wednesdays, Fridays and Saturdays at 11:46 a.m., arriving in Fort Lauderdale at 4 p.m. Flight 266 will depart Fort Lauderdale at 6 p.m., arriving in Panama at 8:03 p.m. on the same days of the week.

From its Hub of the Americas in Panama, Copa offers flights to more international destinations than any other airline from any other hub in the Latin American region. In-transit Copa passengers making connections do not have immigration/customs waits and baggage is checked to the final destination.

Copa's on-board service includes complimentary meals and beverages, including wines and spirits; a 12-channel audio-visual entertainment system in English, Spanish and Portuguese, with new movies monthly and complimentary headsets. Flight attendants are bilingual. Passengers earn miles through the MileagePlus frequent-flyer program. Copa's website, copa.com, is available in English, Spanish and Portuguese; and passengers may purchase tickets in U.S. dollars, as well as 10 other currencies.

Established in 1947, Copa Airlines transported more than 11 million passengers in 2013. The airline was named "Best Airline in the Central America and Caribbean region" at the Skytrax World Airline Awards in June 2013.

About Copa Holdings, S.A.
Copa Airlines and Copa Airlines Colombia, subsidiaries of Copa Holdings, are leading Latin American providers of passengers and cargo services. The airlines currently offer service to 69 destinations in 30 countries in North, Central and South America and the Caribbean. During Copa Airlines' more than 65 years of uninterrupted operations, it has transformed the Hub of the Americas in Panama into the leading hub on the continent. Copa operates one of the youngest and most modern fleets in the industry, consisting of 90 aircraft: 64 Boeing 737 Next-Generation aircraft and 26 Embraer-190s, and has an on-time performance of almost 90 percent, on par with the major airlines worldwide. Copa is a member of the Star Alliance, the leading global airline network, offering passengers 1,328 destinations in 193 countries with more than 18,000 daily flights and 900 VIP lounges. For more information, visit www.copa.com.

More in this category: « The Atlantic Hotel & Spa in Fort Lauderdale Celebrates Its 10th Anniversary This June Everglades Holiday Park Ranked Among Best Florida Attractions »
Login to post comments
back to top